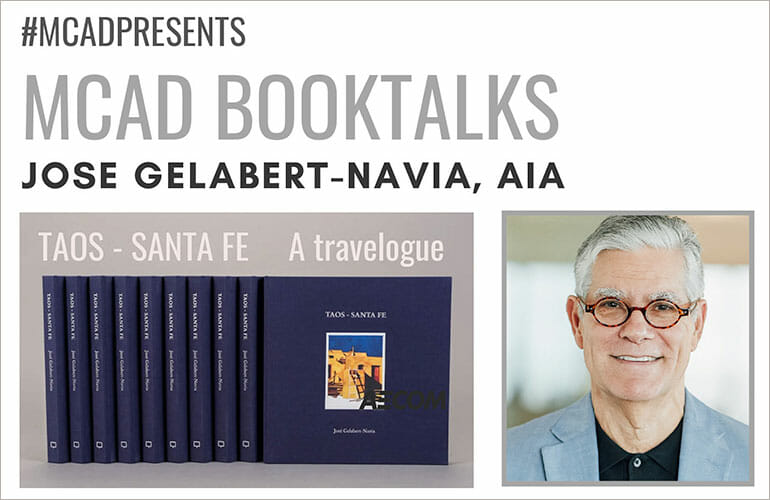 Choose to join us in person at AECOM’s Coral Gables offices, or on Zoom for Jose Gelabart-Navia’s travel book.

The beauty of Taos and Santa Fe captured with exquisite mastery – Exhibition quality production – An homage to a great painter – A remarkable artistic feat by a leading architect Between 1915 and 1917 the Russian composer, Sergei Prokofiev wrote a series of twenty piano pieces. Prokofiev Vision Fugitives, Op.22

While playing them for a gathering of friends, the poet Konstantin Balmont wrote a sonnet which entitled Mimolyotnosti which Kira Nikolayevna would translate as Visions fugitives. Inspired by these dazzling miniatures, I have assembled a jewel box containing twenty individual felt-tip drawings on watercolor paper capturing fugitive visions of Taos and Santa Fe, New Mexico. Few places in the world have such a deeply rooted relationship between the natural and the man-made. Towering above Taos are the Sangre de Cristo Mountains, home to many Native American peoples, casting a mystical shadow on the ancient settlement below.

A ghost of an earlier time, the Taos Pueblo provides a glimpse of Pre-Columbian life in North America. Like Taos, Santa Fe is also a place of ancient and modern myth. In Santa Fe, the Spanish and the Native traditions come together. At the turn of the 20th Century, a Portuguese American painter, Carlos Vierra, passionately pursued the safeguarding and preservation of the regional architecture of the area and the revival of this tradition. Vierra’s modest but evocative paintings of many of the iconic pieces from Pueblo’s past evoke Georgia O’Keeffe and Taos and a unique moment in which American Regionalism stood as an alternative to the Eurocentric modernist architecture of the International Style.